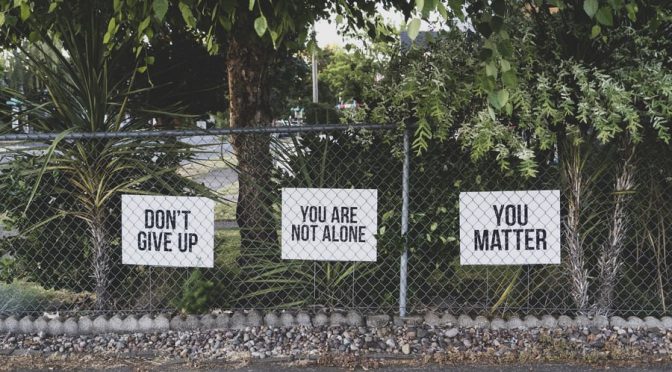 Suicide is the single most self destuctive act. It means that all the attachments in the person’s life have not been enough to contain their hopelessness, rage and despair.

People become alone and isolated internally.  They may be angry with those around them who they could not connect with. More often, they feel hopeless-unable to see past their present issues. The sense of self value hits a new low. Thoughts such as, ‘I am better off dead’, ‘my family will benefit from my insurance’, ‘I really don’t matter’, ‘they will know how low I was feeling’…..

Then a prevailing depression hits a new low – a sense of uselessness, the pain of not being connected with is turned on themselves…..taking action against the low and depressed feelings feels empowering. So, planning their suicide becomes an empowering experience against the experience of prevailing hopelessness and not being of any value.

A perceived rejection, unfair and cruel acts done towards them can all be reasons to kill oneself. The suicide can be saying, ‘you misjudged me’ ‘you thought I was making it up’. In any suicide case, it is clear that the person did not feel there was hope in life and they did not see any way to go on.

The underlying psychology would be something like, ‘I will rest in peace…I won’t have to struggle anymore’. ‘Others will be benefit from my passing…they won’t have to deal with my poorly self’. Here you can see how hopeless it has been-the person has felt hopeless and is projecting it onto others. They are probably also not feeling they can be helped.

Our relationships anchor us to this life and this world. Relationships that are attuned and able to touch the deeper core of strong emotions within us, keep the channels of communication open and reduce the chances of strong negative fixations taking hold. The life instinct overcomes the death instinct and manifests in good relationships, creative hobbies and pursuits.

For the suicidal person, somewhere, connection has been lost and paranoid-schizoid feelings dominate. People become deeply disturbed, suspicious and angry with their near and dear ones. These are not necessarily people who are physically alone. They experience loneliness even among others.

They do not feel understood. Their anguish remains a silent scream inside. Psychotherapy which deals with a discussion of aggression is useful at such times. The therapist engages with underlying aggression and resentment and even if the suicidal person does not like the engagement with his/her darker feelings, it tends to reduce the life force invested in suicidal ideation.

Some therapists will say that this is not true. They feel that those who commit suicide are not passive in their aggression. Consciously, this is true. Consciously, the suicidal person, gives up his aggression with self destruction. the suicidal person has no sense of his/her own ‘presence’ and identity left. He/she feels like a burden to himself/herself and ideas such as my insurance will go to my family might occur. Now what does this mean ? That ‘family’ will be happier for the money from a dead person ? So many clients suffer from guilt for having had to use the money from the dead person’s insurance, even if there was no suicide. It changes a person, having to use such money.

Some suicidal people seem to forgive everyone around them before dying, passing on their mixed feelings to those who survive them. This happens in the event of any death, if the person dying has had time to think about it. Forgiving everyone before leaving the world is possibly one of the healthier options.

So why takes one’s own life? Any method to do so is violent, especially hanging oneself, administering awful toxins etc. Suicide ideation is strong. The thought of ending the despair, worthlessness, anger and loss the suicidal persons are feeling become paramount. It becomes an ideal, a fixation.

Many suicidal people have expressed feelings that were ignored or passed off by those around them. We frequently become nervous when we hear people talk carelessly about death, their own or anyone else’s. These are warning signs-if you feel odd, nervous etc it is because it is potentially dangerous.

I am a psychoanalytic psychotherapist in private practice. View all posts by siteadmin