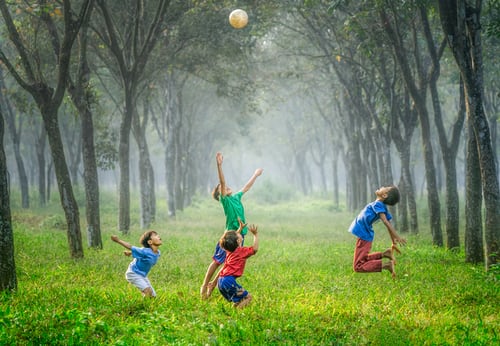 In one of his earliest essays, Beyond the Pleasure Principle (1920), Sigmund Freud discusses the case of a boy, one and a half years old, who develops a game to deal with the trauma that he suffers for the first time when his mother, who he is very attached to, goes away for a prolonged visit and then returns.

He throws the ball over the bed and it goes out of sight. He makes a sound to show his surprise and wonder. After it is found and brought to him, he does an ‘ooo…’ in a delighted way.

Freud is promoting the theory that there is an economic motive involved-the need to restore ‘pleasure’ by which Freud means ‘equilibrium’ in the psychical system which has endured a sudden shock of not seeing his mother for an unpredictable time.

This is how the game helps him to master the trauma of seperation and loss. Says Freud: “..At the outset, he (the boy) was in a passive situation-he was overpowered by the experience; but by repeating it, unpleasurable though it was, as a game, he took on the active part.”

This observation -deduction has paved the way for the development of the idea of trauma. Not many credit Freud anymore. With new approaches, the original thinker is ‘deleted’. Do read his works. Elegant writer.

From this game, he also deduced that an object thrown away by this child is his/her way of mastering his anger, owning it. If you can imagine that the object/toy stands for mother or father or anyone who he/she is attached to and leaves unexpectedly, causing uncertainty and pain, a child can at least take it out on the object/toy and throw it away or break it. This little boy had heard that his father had to ‘go away to the front’ as it was war time. He would throw the object away and say, ‘go to the fwont!’ In this way, he was able to master, at least in his mind, a situation he had no control over-his father going to war, his mother leaving him for a visit.